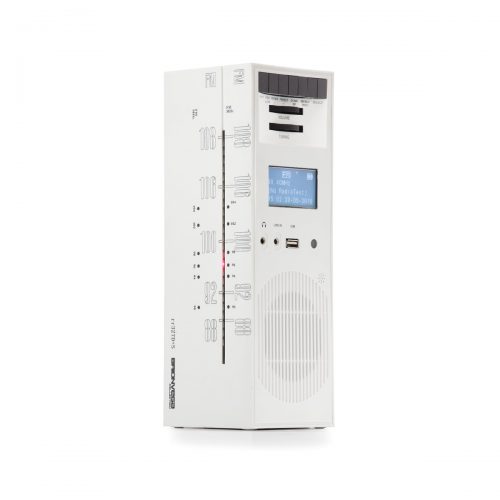 Radio Grattacielo $500.00
Back to products

A simple series of holes enables furled or unfurled umbrellas of any size to be popped easily.

Poppins feels both serious and playful; the glossy plastic emphasizes its waterproof qualities, while the form reminds us of a game – like the triangle used in billiards or snooker.

By happy coincidence it is also the perfectshape for wine bottles!”

Me Too collection was launched in 2004, beginning the collection of objects and furniture for children between two and six. The product range offers a diverse programme: furniture, accessories, toys and even children’s clothes which are durable, robust and set no limits for the creativity of kids. The products of the Magis – Me Too collection stand for high quality, chidlren-friendly, modern design and just lots of fun.

Internationally acclaimed designers Edward Barber and Jay Osgerby founded their eponymous studio in 1996 after graduating with Master’s degrees in Architecture from The Royal College of Art in London.

Barber and Osgerby’s research-led practice has developed collections for Vitra, B&B Italia, Venini, Cappellini, Magis, Swarovski, Flos and Established & Sons, whilst also producing edition furniture and one-off works for both private and public commissions. Both Honorary Doctors of Arts, Barber and Osgerby have lectured internationally and hosted workshops at Ecal, Switzerland, and the Vitra Design Museum. Their work is held in permanent collections around the world including the V&A Museum, London; New York’s Metropolitan Museum of Art; London’s Design Museum; and the Art Institute of Chicago.

Alongside their eponymous studio, in 2001 Barber and Osgerby founded Universal Design Studio, now recognised as one of the world’s most innovative creative design consultancies working in architecture, interiors and exhibition design. In 2011 Barber and Osgerby were appointed to design the London 2012 Olympic Torch, while in 2012, the pair followed this with the launch of MAP, a strategy-based industrial design studio that draws on the creative and commercial skills of Barber & Osgerby to provide design intuition, creative direction and research to ambitious clients.

$89.00
Add to cart
Quick view
Add to wishlist
Sold out